I for one visit my library regularly. I was there this morning, in fact, editing my current manuscript. I borrow books, I use the reference section.

Let’s be clear about one thing: without access to libraries, I may never have become a reader. I certainly wouldn’t have obtained a degree, let alone become a writer. I owe libraries a LOT! 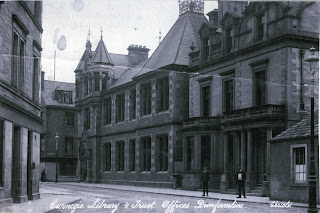 A postcard of the original Carnegie Library in Dunfermline

A key setting in the manuscript I was editing is the Victorian Carnegie Library in Dunfermline in Scotland. I cannot think of a person with a more significant library-legacy than Andrew Carnegie, the founder and funder of that first Carnegie library, and then, wait for it, over 2500 more around the world! 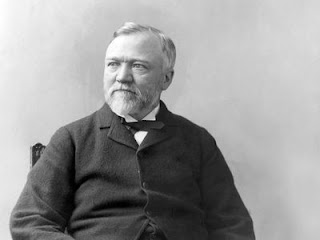 Andrew Carnegie was born in Dunfermline in 1835. His family home there was a humble weaver’s cottage, now home to the Andrew Carnegie Birthplace Museum. In 1848 when Andrew was 12 years old, the Carnegie family emigrated from Scotland to the New World - the United States of America.

The young Andrew began his working life as a messenger in a Telegraph Company. Always keen to seek opportunities to better himself, he soon progressed to telegraph operator after teaching himself Morse Code. Later he became personal assistant to the Superintendent of the Pennsylvania Railroad Company, rising to the post of Superintendent himself in 1859.

Carnegie was a skilled businessman, investing wisely in a range of industries such as oil and steel. Soon, the Carnegie Steel Company dominated the market in America and morphed into a billion-dollar company – the first company anywhere to do so.

Andrew Carnegie was not only incredibly wealthy, but he hadn’t forgotten his humble roots. His urge to learn had resulted in unprecedented success – now Carnegie wanted to give back by offering the opportunity of a better life to the people of his hometown back in Scotland. The libraries he was able to use as a young man had enabled him to gain new skills and make something of himself. Perhaps it is not surprising that he chose libraries as his vehicle to do good, a pioneer of philanthropy.

To say it in his own words: ‘No millionaire will go wrong… who chooses to establish a free library in any community that is willing to maintain and develop it’. 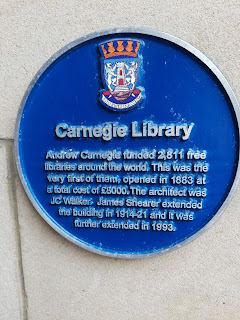 However, Dunfermline was only the beginning: the following years saw a growing number of free-to-access public libraries on both sides of the Atlantic. Dunfermline’s Carnegie Library was first, opening its doors to the public in August 1883. All it took was an £8,000 grant donated by Carnegie while the rest was raised by taxation through the Public Libraries (Scotland) Act.

I loved learning about the first library for my manuscript, Rivet Boy, due out from Cranachan Publishing in February 2023. The first librarian there was an Edinburgh bookbinder named Mr Alexander Peebles who was chosen from more than 250 applicants and who lived in the flat above the library, aided in his work by a single assistant. More than 2000 volumes were issued on the very first day of its opening. 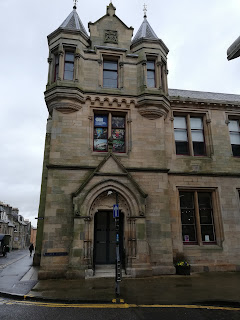 The Carnegie library, now combined into a gallery and museum,
still takes pride of place in Dunfermline's centre

The combination of public money and Carnegie-backed funding proved a popular finance route to other libraries for decades to come, often ornate and impressive buildings like the Central Library in Edinburgh.

Even now, nothing quite beats walking into a building filled with books for me. The smell, the heavy extravagance of knowledge and imagination, billions of letters and words on millions of pages in thousands and thousands of volumes. It’s rare for me to come across snippets of knowledge I hadn’t searched for on the internet, but such is the richness of a library that we can’t underestimate its value – something always, always catches my eye unexpectedly. Libraries almost everywhere are now under threat. I am sure Carnegie would have a word or two to say about that, and so should we.

What was the impression this new library might have made on a young boy, aged 12, just the same age as Andrew Carnegie was when he arrived in the U.S?

We can only guess.

Barbara outside the old entrance to the building

Barbara Henderson is the author of seven historical books for children, six are published by Cranachan, her most recent - The Reluctant Rebel is published by Luath Press. She has won the Historical Association's Young Quills Award for Historical Fiction for Children in 2021 and 2022.

Find out more at barbarahenderson.co.uk