The historic county of Lancashire was the birthplace of England’s first industrial canals.

Canals were created as an alternative way to transport coal. In the 1750s coal was carried by horse and cart over poor quality roads. The canals meant coal could be taken by water, faster, easier and cheaper!

The Sankey (St Helens) Canal was approved by parliamentary act in 1757. The permission granted was to make the Sankey Brook navigable, but the engineers instead cut a separate canal alongside the river. 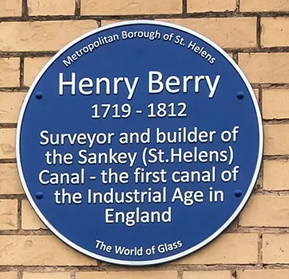 Eventually the canal would run 15.8 miles between St Helens and Widnes, meaning coal could be transported both locally and further afield to salt works on the river Weaver and for use in a growing number of chemical industries.

Canal locks make it possible for barges to climb up high hills and mountains.

The Sankey Canal included broad locks which would allow traditional Mersey flats – a type of sailing barge. The flats had tall masts for their sails, so swing bridges were also needed to allow the barges to pass through.

The Sankey Canal used the first staircase lock in England, called the Old Double Lock. Staircase locks are used where the gradient is very steep.

The Sankey canal closed in 1963, but the towpaths can still be enjoyed. There are plans to restore the route to water traffic again. https://www.sankeycanal.co.uk/

Nicknamed the ‘Dukes Cut,’ the Bridgewater Canal was opened in 1761. 39 miles long, it stretches between Runcorn and Leigh. It does not include any locks, as it is built on one level.

The Canal was named after the third Duke of Bridgewater, Francis Egerton. 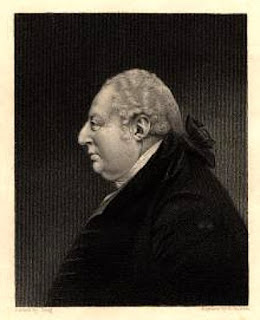 The Bridgewater Canal was the first industrial canal in England that did not follow the route of an existing watercourse. 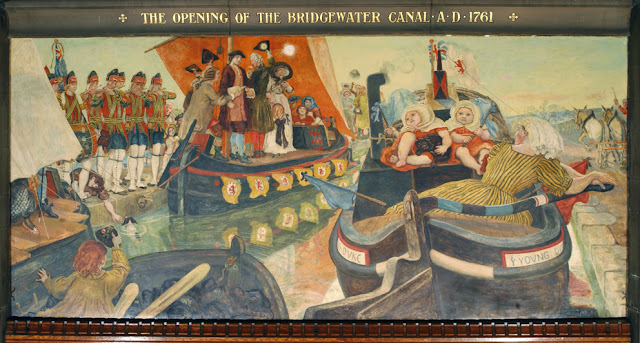 The opening of the Bridgewater Canal as depicted by artist Ford Madox Brown.
One of twelve murals in the Great Hall, Manchester Town Hall

The Duke of Bridgewater owned a mine at Worsley, but he had two problems: the mines kept flooding and he needed to find a way to make more money.

As a young man, Francis Egerton took a grand tour of Europe, and it is thought seeing the use of canals in France also inspired him to commission his own.

The solution – reached with the assistance of his steward, John Gilbert, was a specially built watercourse which would drain the water away and could be used to transport coal to market.

There would be two elements to the plan – a series of underground canals at Worsley Delph and the creation of the Bridgewater Canal.

The Duke of Bridgewater needed a canal engineer to bring the plans to life. He chose James Brindley, one of the very early canal engineers. 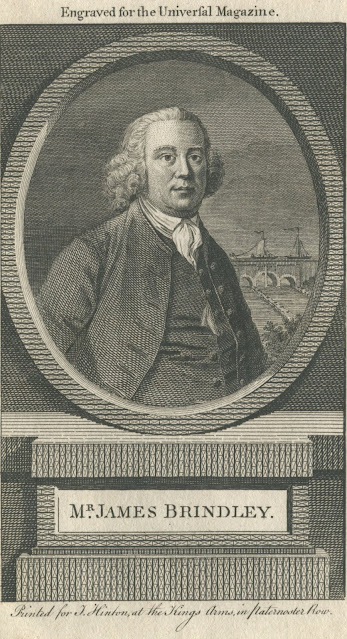 James was a former Millwright apprentice, as a child he had been educated at home by his mother.
When asked by Parliament for a model of his proposed Barton Aqueduct, he dashed out and bought a huge cheese. He then returned and cut the cheese in half, then pulled a long rectangular object out of his coat and placed it across the top to represent the canal! 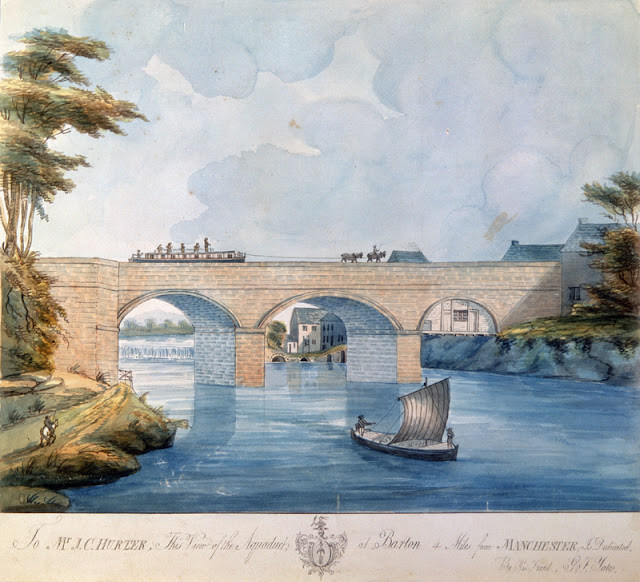 The aqueduct was the first of its kind in England. It had to be demolished in 1893 for the construction of the Manchester Ship Canal. The Bridgewater Canal at Worsley ((Photo by Susan Brownrigg.)

At the Worlsey end of the Bridgewater Canal the water is a distinctive orange colour. The mining process meant that iron ore in the bedrock was released into the water. This iron oxide, or rust, was deposited as sludge in the passageways and then passed on into the canal water. Interestingly, the sludge used to be sold as 'ochre' pigment for artists to use in their paint!

Delph means delved or dug place. The site was originally a sandstone quarry. The artwork you can see at the Delph today is a modern interpretation of the crane which was used to lift the heavy stone onto barges. The Delph is a large canal basin. There, you can also see two tunnels carved into the rock. These entrances lead to a series of underground canals. The canals are on four levels and covered 47 miles.

This subterranean system allowed ten time more coal to be transported than had been possible by road, and the price of coal halved! The underground canal was so tight that miners had to use ‘legging’ to get their narrowboats called starvationers to go through. The miners would lie on their back and use their legs to push the boat along.

The starvationer boats used in the underground canals were just four and a half foot wide.

A replica coal cart made from bronze is another vivid artwork at Worsey Delph. Carts like this were pulled by women known as 'drawers.'

Young children also worked in the mines. The coals in the cart are engraved with stories telling what life was like for the children working underground in the dark.

The Mines Act of 1842 finally stopped children under 10 from working there. 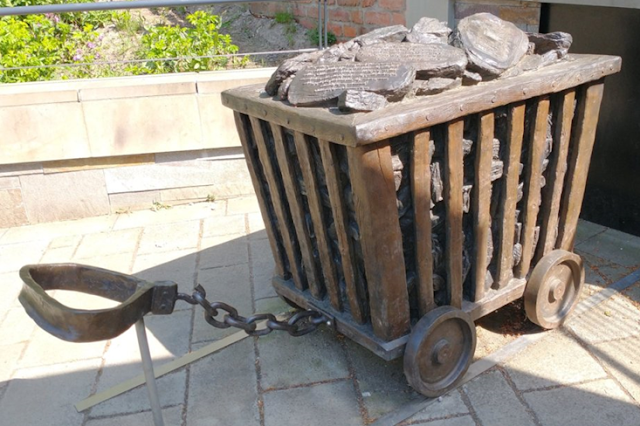 The replica coal cart by Bronzecast (Photo by Susan Brownrigg.)

When the underground canal opened people came from far and wide to see it. Today it is still a popular tourist spot.

You can find out more about Worsley Delph over on the Time Tunnellers YouTube channel. 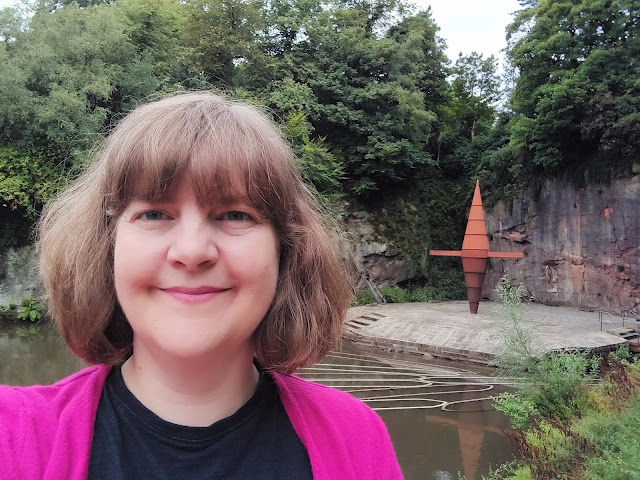 Susan's books are published by Uclan Publishing. They are available from bookshops and online retailers.
susanbrownrigg.com
@susanbrownrigg
susan brownrigg facebook author page
at August 31, 2022 No comments:

The garden of my house in Perth, Scotland, lost its iron rail fence in World War II – not to an enemy bomb, but to patriotism. All over the United Kingdom, iron railings got chopped down in parks and gardens to support the war effort. Here's a link to a newsreel from 1940 showing men collecting railings in a London park!

The idea was that the iron would be melted down and used to make ammunition and armour for tanks and ships, although nobody’s really sure if that happened – there’s a rumour that London’s iron railings were all dumped in the Thames, and I’ve been told that Perth’s ended up in landfill on St. Magdalene’s Hill. 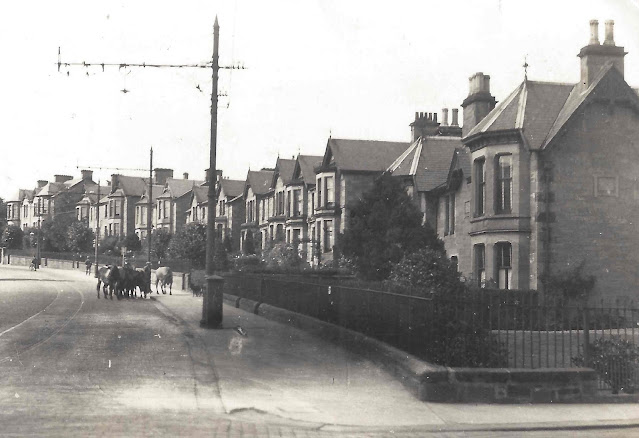 Iron rail fences on our road early in the 20th century

Parliament’s Hansard report for 13 July 1943 tells us that somebody wanted to know what was being done with all that collected iron. Lord Hemingford commented, “It has been felt that an injustice has been done to a very large number of usually uncomplaining and patriotic people. This question of the requisitioning of railings and gates is rather like eczema; it is not very serious, but it is most confoundedly irritating, and causes a vast amount of bad temper.”

For years, whenever I looked at the stumps of those railings in my garden wall, I thought of them as my house’s wartime scars. What I didn’t realize was that World War II took away something far more tragic from my house than its decorative iron railings. It took away the boy who’d come of age in that house and who’d still lived there when he went to war as a young man, the only child of the couple who lived in that house for forty years. He left my house to go to war and he never came back. 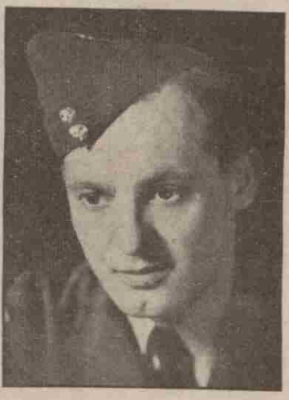 He was a navigator in the Royal Air Force. He was part of a team of “pathfinders,” a dangerous job in which an advance aircraft would have to find and mark an attack site for a bomber squadron, dropping flares in the dark that would light up the enemy target.  On 7 Dec. 1940, he and five other crew members took off from RAF Stradishall in Suffolk in their “Wimpey” – a twin-engined Vickers Wellington bomber. They flew through atrocious weather in the dark to Germany, along with two other pathfinder aircraft, to mark the target for a bombing raid in Dusseldorf. They vanished later that night somewhere over the North Sea – “Aircraft failed to return,” is what the official reports said. 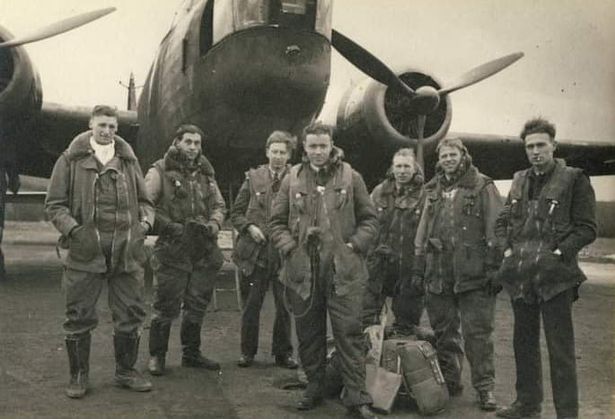 Let me tell you about Chick. (His real name was Charles.) He was a mild-looking young man with dimple in his chin – his RAF portrait is in black and white, but I think he must have been like Kate, his mother, short and lightly built, with brown hair, those amused eyes blue. Robert, Chick’s adoptive father, ran a fishmonger’s shop in Perth, where Chick helped out, but in 1939, with war looming, he joined the Royal Air Force as a reservist.

Late in August 1939, just before Germany invaded Poland, one of Chick’s mates who was also a reservist got his calling-up papers. The friend and a few others turned up at Chick’s house – MY house! – at eleven o’clock that night, and they all decided they’d have one last night on the town before they were called into action. Chick drove them from Perth to Dundee where, arriving after midnight, they had a couple of drinks and checked out a couple of all-night coffee stands before heading back to Perth at about three o’clock in the morning.

That’s when Chick ignored a stop sign, was spotted by a waiting policeman, and got pulled over for driving under the influence of alcohol – which apparently he didn’t have a very good head for!

He was fined £10 and given a six month driving ban. He was contrite and honest about what had happened, and solicitor who defended him pointed out that it was Chick’s “first time in trouble”! (Source: Dundee Evening Telegraph, 25 Aug. 1939, page 6).

See my source note there – I got this story from an old newspaper. It’s available online in the British Newspaper Archive. Actually, everything I know about Chick – the details of the colour of his mother’s hair and eyes, the kind of plane he flew, the date of his disappearance, even his nickname – I dug up by accident simply because I just wanted to know more about my own old house.

And in the wider sense, isn’t that the real reason we dig up history – because we want to know more about our own house, our own city, our own people, our own world? To learn from them, to connect to them in their strengths and to correct their weaknesses?

I tell this as a coherent story, as if I knew these people, Chick and his family and friends. But what I know about them I found through scraps, fragments, puzzle pieces that I’ve fit together: RAF war graves memorials, stories and police reports and personal columns in local newspapers, internet queries on ancestry chat boards, wartime bulletins, photographs, voting records, passenger lists for ships and airplanes. 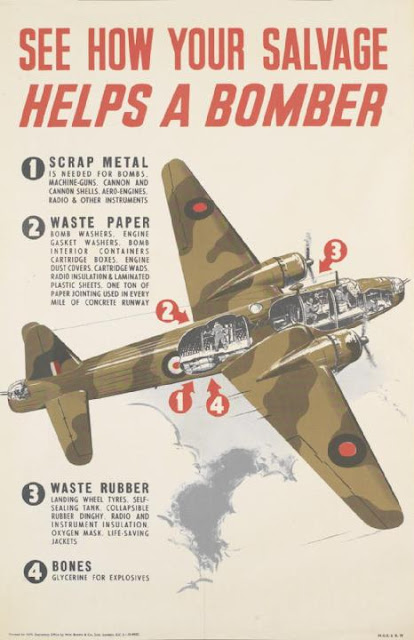 Look at that – the scrap metal from his own fence railings may have become part of the Wellington bomber that Chick died in.

All my stories begin this way – finding connections between the ordinary and the extraordinary, between daily life and drama, between the past and the present. I hope this gives you some inspiration for finding your own fascinating connections! 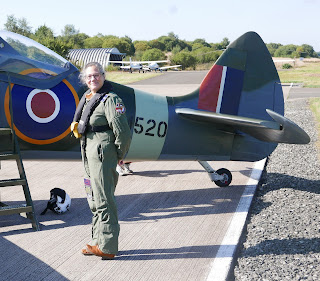 Elizabeth Wein is a recreational pilot and the owner of about a thousand maps; flight inspires her young adult novels and non-fiction. Her best-known book, Code Name Verity, was short-listed for the Carnegie award and became a number one New York Times bestseller in 2020. She has published three short novels with Barrington Stoke, including Firebird, which won the Historical Association's Young Quills Award for Historical Fiction in 2019. Look for her latest flight-inspired historical thriller, Stateless, published by Bloomsbury in March 2023. 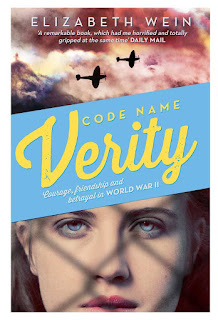 Code Name Verity by Elizabeth Wein.
The link to my info on the Barrington Stoke site: 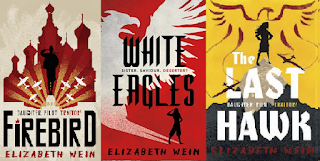 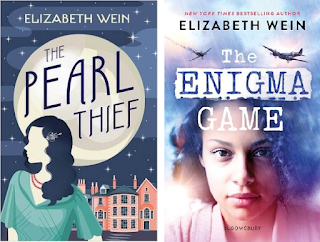 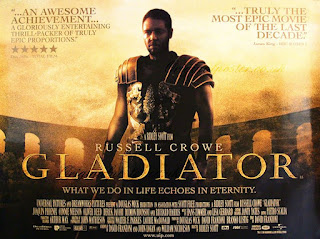