Christmas Traditions - by the Time Tunnellers

In our final blog post before Christmas, the Time Tunnellers explore some favourite traditions. Jeannie Waudby: My Christmas tradition is something we used to do as children. We always made our own decorations, usually from scrap paper or crepe paper bought from a fantastic tiny stationer’s. It was only big enough for a long counter behind which an old man perched on his stool with wonderful things around him: rolls of shiny paper, glitter, pots of paste… 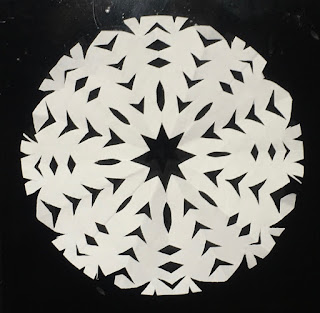 We made window snowflakes by folding paper circles in half again and again and then snipping little triangles out. Once unfolded they formed a snowflake pattern.

The nice thing about this decoration is its use of low-key materials – paper and scissors. In a short time you can make enough snowflakes to cover a window. You can make them more dramatic by using silver paper or by varying the sizes, and you can experiment with different shapes. 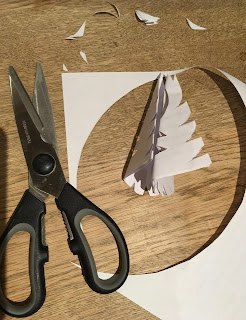 Scissors and paper is all you need

We also made paper chains out of cut-up magazines and old wrapping paper and draped them across the doors and walls. These were also quite quick and easy to make. People would have made these throughout the last century and even the one before. Here are the Fossil sisters from Ballet Shoes by Noel Streatfield with their paper chains, illustrated by Ruth Gervais. 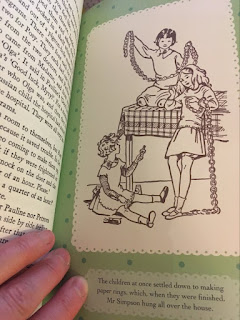 Susan Brownrigg:When I was little, my family received lots and lots of Christmas cards. I remember helping my mum drawing pin long pieces of red wool on the walls of the living room and hall and placing the open cards over them. Their would be cards from distant relatives, former work colleagues and loved ones who lived over seas. 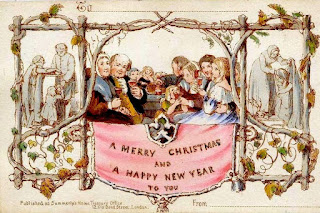 The cards would often feature snowy scenes, golden bells, cute animals, Father Christmas and nativity scenes. They would look so cheery and festive as we counted down the days to Christmas. 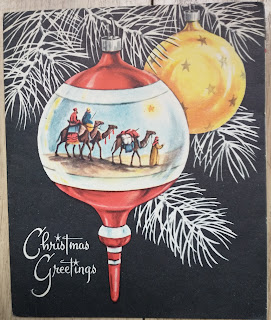 Sadly, I don't have any of those cards anymore, but I do have a lovely small collection of cards from the 1930s which I use when visiting schools to talk about my new children's book, Gracie Fairshaw and the Trouble at the Tower, which is set at Christmas, 1935.

The cards are much smaller than those my mum put up in the 1980s, but they feature many of the same scenes.

I love looking at the old verses and personal messages in side them, and they really give a sense of the times.

I especially like one design I own that features a very 1930s Fox Terrier on it! 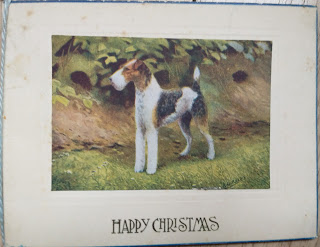 I wonder what future generations will make of card designs from the 2020s! 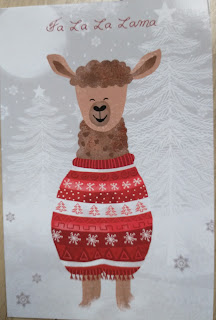 A 2021 Christmas card
Catherine Randall: The first sign that Christmas is coming in our house is when we get out our wooden nativity set, which doubles as an Advent calendar. I’ve shown this on the Time Tunnellers YouTube video. 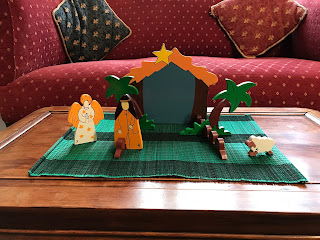 The first one is a song. Every Boxing Day, my mum’s family would stand around the piano and sing a song called ‘Christmas Boxes’ from an old Victorian song book. 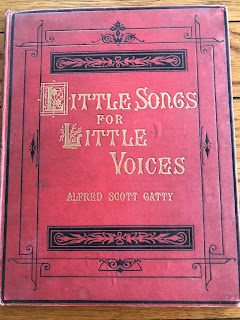 I think the tradition started when my granny was a child, over a hundred years ago, but it may be even older as the book is from the 1870s. 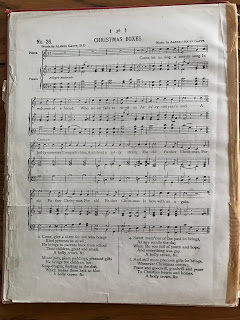 The tradition has passed down to me, my cousins and our families (though the quality of the piano-playing has declined somewhat!) I know Christmas is coming when I get out our Advent nativity scene, but I know it is really here when I hear the first few chords of ‘Christmas Boxes’. 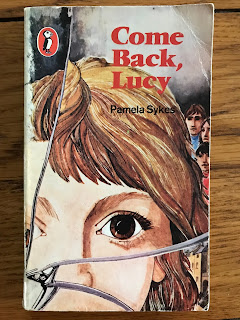 Come Back, Lucy by Pamela Sykes

The other thing I do most Christmases is reread an old children’s book - Come Back, Lucy by Pamela Sykes. First published in 1973 and now sadly out of print, it is a wonderful Christmassy time-slip story about a lonely girl who moves into a Victorian house with a new family and is haunted by the girl who lived there in 1873, with dramatic results. It is one of the most imaginative, evocative books I have ever read. I only have to open it to get that lovely, enveloping Christmas feeling!

Ally Sherrick: Christmas wouldn’t be Christmas without present-giving, no matter how big or small the gift. Of course, the Christian Nativity has a gift-giving scene at its heart – when the three wise kings travel from afar bearing gifts of gold, frankincense and myrrh to give to the infant Jesus. But the tradition of present-giving in December began long before the emergence of Christianity. 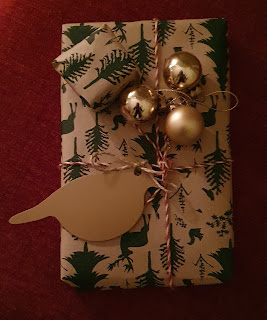 For example, the Roman festival of Saturnalia, held to honour the god Saturn, and which took place in the dark days leading up to the winter solstice, was a time of great feasting and merry-making, and of gift-giving too.

But modern gift-givers beware! Extravagant presents were looked down on as not being in the spirit of the season. If you really wanted to show the recipient you cared, simple gifts were judged to be the best. Things like combs, toothpicks, moneyboxes and lamps. 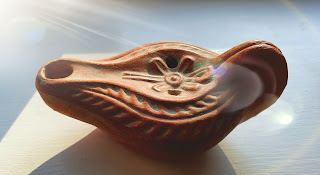 And, usefully for budding authors, writing tablets! People also gave small wax and clay statues known as sigillaria and joke gifts too.  Meanwhile, if you fancied yourself a bit of a poet you might include a line of verse or two – much like we do in Christmas cards today.

Barbara Henderson: I love Christmas and the fact that there are so many different traditions, past and present.
Last week, I took a train to Edinburgh to research my latest manuscript, a story set during the reign of Mary, Queen of Scots. 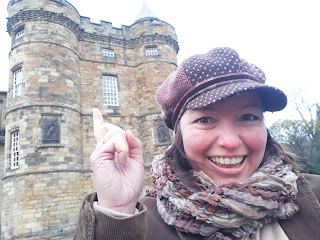 Barbara in Edinburgh
I timed my visit so I could catch a talk about Christmas at the Court of the ill-fated Mary – these sorts of things add such wonderful colour to a historical novel.
Mary was certainly no party-pooper! She was used to lavish Christmas celebrations in Catholic France where she was brought up, but on her arrival, the Scottish protestants soon slammed on the brakes, forcing Mary to move some of her more extravagant celebrations to the 6th of January instead.
Her musicians were so intimidated by the protestant Lords that they refused to perform – the pressure was just too much.
One thing we do know the Queen conducted is a celebration called ‘The Queen of the Bean’. A cake was baked for Christmas, and a bean was added to the dough. The Queen’s companions would each cut a slice of the cake, and whoever found the bean was allowed to be queen for the day. The Queen’s friend Mary Fleming won it one year, and was given a silver dress and a necklace of rubies belonging to the Queen to wear, while the famous monarch donned humble clothing instead. It echoes God making himself lowly in Jesus’ birth, but it also sounds great fun!

The Time Tunnellers would like to wish our readers a Happy Christmas, we will return in the new year.